WII to train 36 experts for study of Ganga aquatic species

DEHRADUN: Dehradun-based Wildlife Institute of India (WII), which has been mandated to prepare conservation plans for aquatic species in the Ganga and its tributaries under the central government’s National Mission For Clean Ganga, is going to train a batch of 36 personnel and officials along with front line staff of the forest department of states situated alongside the river including Uttar Pradesh, Bihar, Jharkhand and West Bengal.

WII sources said that the training will involve preparing comparative data of the population of major aquatic species such as dolphins, ghariyals, turtles and others animals living in the Ganga as well as ways to monitor their conservation programmes. The group will also be taken to Chambal National Park, home to rare and critically endangered aquatic species in Madhya Pradesh for their field training, the sources added.

The Union ministry of Ganga rejuvenation had entrusted this pilot project, worth Rs 25 crore, to WII last year.

Director of WII, V B Mathur said, “The healthy presence of aquatic species is a reliable indicator of the river’s good health. Under this project, WII will conduct surveys to understand the population growth of these species. In case of decreasing numbers, restoration programs will be run with the help of forest teams and local residents. Rescue and rehabilitation centers will also be set up for endangered fauna at selected sites.” 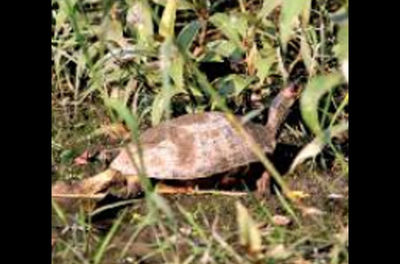 Satyendra Verma just performed India’s highest BASE jump, from 600 feet above the ground Over 10,000 endangered tortoises rescued in Madagascar