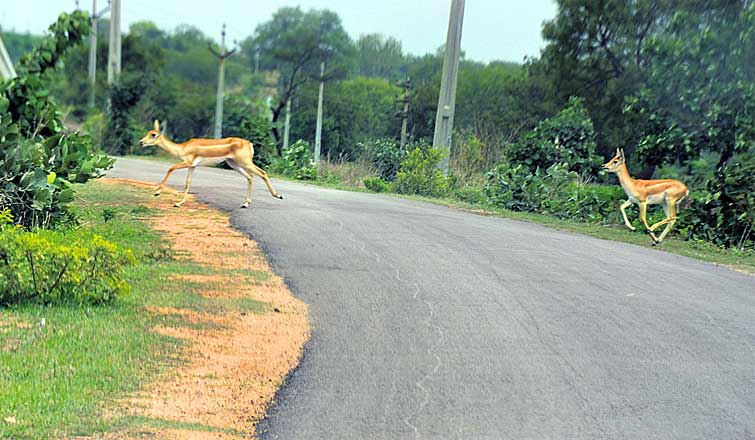 Fencing of forest area, where the wildlife movement is considerably high, is one of the major preventive measures the forest department had to take up to prevent the wild-animals from crossing the busy roads.

Shrinking forest cover and laying of roads through forest area are resulting in the death of wild animals in road accidents. While a blackbuck sustained serious injuries in Papannapet mandal of Medak district, another was killed on Nanded-Akola Highway near Kansanpally in Andole mandal. Citizens caught hold of a Chousingha, which strayed out of the forest in Veldurthi mandal, and handed it over to forest authorities.

Such incidents are being reported across the State. On Friday, a spotted deer was injured in a road accident in Kamareddy district. A speeding car ran over a mongoose near Narsapur forest area recently. Several squirrels, snakes — some of them were rare species – and monkeys were killed in road accidents as the vehicular movement has increased near the forest areas. Though the Forest Department has put up caution boards along the roads to alert citizens on wildlife movement, road users seem little concerned about them. Speed and negligent driving are resulting in the accidents.

Though the Forest Department has been recording the deaths of big wild animals like deer, wild boars, among others, there is no mechanism to count the deaths of mongooses, squirrels, snakes and monkeys. Since the government is set to widen many State and national highways besides laying some new roads in a couple of years in Telangana, the Forest Department should initiate some measures to prevent such accidents.

Fencing of forest area, where the wildlife movement is considerably high, is one of the major preventive measures the department had to take up to prevent wild animals from crossing the busy roads. Divisional Forest Officer, Medak, M Padmajarani said they should also conduct sensitisation programmes by forming clubs and making all stakeholders part of the programme. Not only animals, a number of birds are also being killed in the road accidents every year in Telangana. Since there are major birding hotspots like Manjira, Narsapur, Pocharam and Ameenpur, the movement of birds is also quite high.

According to statistics available with Union Surface Ministry, over 3,000 road accidents involving wild animals were reported in 2013. However, a majority of the accidents were going unreported since there was no proper mechanism in place.

Wild boar attacks on the rise

The other aspect of road accidents involving wild animals is not heard frequently, but it has become a menace of late in Telangana. Overpopulated wild boars, which move in a herd, have been coming in the way of speeding bikes, autos and other vehicles.

An auto carrying labourers overturned near Jogipet resulting in accident. As many as six passengers sustained serious injuries. This is not an isolated case. Almost every village which suffers due to wild boar menace has a victim of road accident involving these wild pigs. Some of the villages have dozens of such victims. As many as 20 persons sustained injuries in Korpole village of Pulkal mandal. Every village in erstwhile Medak district has a similar story to narrate on wild boar menace.

“Though those who were killed by wild boars were being paid ex gratia, the victims of the road accidents are not eligible for any compensation,” DFO, Sangareddy, K Venkateshwarlu said.