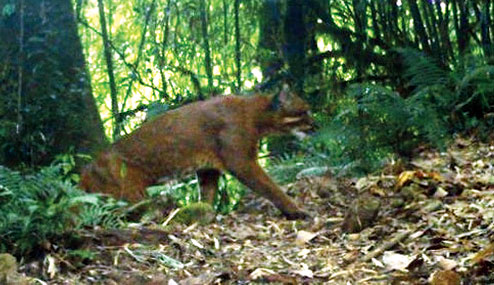 Jalpaiguri: Photos of the golden cat, a species rarely sighted in recent years in north Bengal, have been captured at the Neora Valley National Park, foresters said on Friday.

Since last week, foresters have been examining photos clicked by cameras in the park. The have found pictures of Royal Bengal Tiger, clouded leopard, dhole, civet and some other species.

“We have checked photos of nine of the 15 cameras at the park. In two of the cameras we checked, we found photos of the golden cat,” said Nisha Goswami, the divisional forest officer of the Gorumara division.According to her, about 20 years back, an injured golden cat was found at the Mahananda Wildlife Sanctuary, located on the outskirts of Siliguri.

“We had information that golden cat is there in Neora but there was no photo. It is good that we got a photo now. It seems the species is there in good numbers,” said the forest official. Golden cat, sources said, is also found in Nepal, Bhutan and China.

“The hilly terrain here is contiguous and the Neora Valley National Park stretches from 2,000ft to 500ft above sea level. This is why the species has chosen the park as a habitat,” said another forester. After photos of rare and varied species of animals were, the department has installed seven more cameras in other locations of the park.

“We plan to place more cameras in the entire (159.89sqkm) park. This will help us ensure the safety of the animals and enable us to know more about the wildlife,” said Goswami.

The trap cameras installed at different locations of the Neora Valley National Park in Kalimpong district have clicked pictures of other some rare animal species, including the clouded leopard and the royal Bengal tiger.The state forest department had installed 15 cameras in the park to collect more photos of the predator after a cab driver had clicked photos of a tiger on the fringes of the park last year. 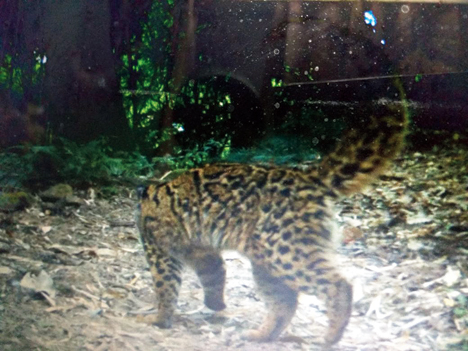 “Recently, we came across photos of tiger clicked by some of the trap cameras. While we were checking the pictures, we found photos of co-predators like the clouded leopard and golden cat and some other species also. These photos will help us in due course to calculate the population of animals. The pictures will also help give an idea of the prospective habitats of these animals within the park,” said a senior forest official.

Among other species which have been clicked include the lesser cat, large Indian civet, goral, dhole (wild dog) and Himalayan yellow-throated marten.

In 2006-2007, a Calcutta based NGO, working on wildlife conservation had carried out a survey in the park. “At that time, they had found indirect evidences like scat, scratch marks and dwellings, indicating the presence of the rare species. It is good that we have photos now. We are yet to check all the trap cameras. We hope to retrieve some more pictures,” the forester added.

The photos have been clicked at heights ranging from 2,000 ft to 10,000 ft from the sea level and in locations like Rachela, Dhulidara, Rhenick, Pankhasari and Baset, all within the park.

“Now, it is a proven tiger habitat. We are taking several steps to protect the park and conserve the wildlife population. The new photos of other species will further help us in drawing our plans,” a forest official based in Calcutta, said over phone.