Landslips or rains did not have major impact on wildlife in Kerala, says top forest official 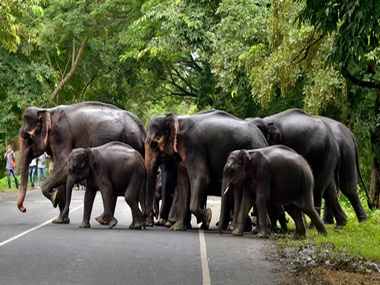 Kochi: Landslips and heavy rains unleashed in Kerala forests causing flooding in downstream did not have any major impact on its precious wildlife including elephants, tigers and leopards, a top state forest official said on Thursday.

Principal Chief Conservator of Forests P K Kesavan said generally animals have got a “strong sixth sense” and they become “alert” at the time of any unusual changes in the nature helping them escape to safety at the time of its fury. “As of now, no serious issues,” Kesavan told PTI.

He said there were instances of landslips in forests due to heavy rains but no cases of deaths of animals have been reported so far.

The world’s longest venomous snake has been listed as Vulnerable on the IUCN Red List since 2010 as it was threatened by habitat destruction.

Some deaths of wild animals including a 14-year-old tiger in Thekkady in Idukki district and three elephants — two in Idukki and one in Vazhachal— were reported during this period but these were not related to flooding or rains, he said.