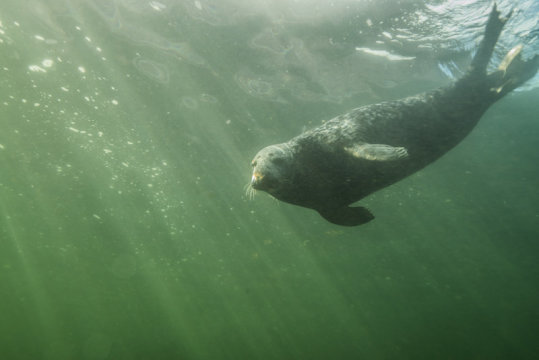 But now a Monash University-led international study has discovered that wild grey seals can also clap their flippers underwater during the breeding season, as a show of strength that warns off competitors and advertises to potential mates.

This is the first time a seal has been seen clapping completely underwater using its front flippers.

“The discovery of ‘clapping seals’ might not seem that surprising, after all, they’re famous for clapping in zoos and aquaria,” said lead study author Dr David Hocking from Monash University’s School of Biological Sciences.

“But where zoo animals are often trained to clap for our entertainment — these grey seals are doing it in the wild of their own accord.”

The research, published today in the journal Marine Mammal Science, is based on video footage collected by naturalist Dr Ben Burville, a Visiting Researcher with Newcastle University, UK.

The footage — which took Dr Burville 17 years of diving to catch on film — shows a male grey seal clapping its paw-like flippers to produce a gunshot-like ‘crack!’ sound.

“The clap was incredibly loud and at first I found it hard to believe what I had seen,” Dr Burville said.