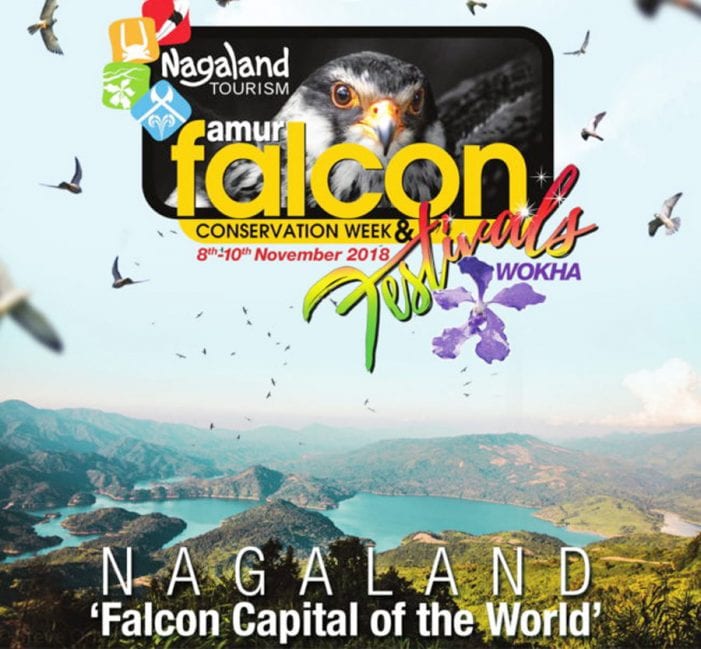 The Amur Falcon Conservation Week and Festival 2018 was held from the 8th-10th of November 2018. With an aim to create awareness on conservation as well as exploit the potential of eco-tourism in and around the Doyang Valley, the events on Conservation, Adventure Sports, Outdoor activities, Watersports and Angling, Cultural and Traditional activities, Food and Music events were held.

Nagaland already hosted the ‘Dzükou Valley Festival’ from October 19 to 25. Moreover, Nagaland is the home to the Hornbill festival for which it has a particular place in the world map of festivals. Tourists from all across the world make their way to this northeastern state to be a part of the amazing Hornbill festival.

As already known as the ‘Falcon Capital of the World,” this new festival to showcase the amazing treasure of the state will be a great venture for the tourism department. The tourism website of the state also mentions that this festival is going to be an annual affair from this year to coincide with the “peak migration period and the best season for undertaking outdoor activities.”

Apart from attracting tourists to the state, the tourism department also aims at spreading awareness on wildlife conservation among the masses. It states that this festival aims to “address alternative and sustainable livelihood opportunities for the community through eco-tourism.”

There are over a million of Amur falcons that come to Nagaland which later fly off to Somalia, Kenya and South Africa. Amur falcon (Falco amurensis) is a small raptor of the falcon family. The most amazing factor about these kinds of birds is that these migratory birds have one of the longest migration routes of all birds, doing up to 22,000 km in a year.

With Wokha District in the centre of the Human/Animal conflict in Nagaland, the Government’s initiative to mitigate the problems and create space for co-existence of man and animal has been very welcoming and encouraging. It is important to mention that the farmers of the surrounding villages of Doyang could not harvest their produce from their fields this year due to the raids by the elephants who are trying to survive in a very confined space.

The Amur Falcon Conservation week and Festival was an eye opener for the community as an alternative source of livelihood through eco-tourism while reducing Jhum cultivation, de-forestation and random exploitation of the natural resources. The huge and multiple potential for eco-tourism in this compact location may have created a conflict of interest for various stakeholders and agencies, but on a broader sense, co-existence also meant looking at both sides of a coin.The festival was held for three days and celebrated alongside the Lotha Nagas’ post-harvest festival Tokhu Emong.

Under the initiative of Shri MhathungYanthan, Advisor Horticulture Nagaland, the concept of the Amur Falcon Festivals was given birth and was entrusted to the Natural Nagas on June 6, 2018. Events were listed and a PowerPoint presentation was prepared on the potential of eco- tourism activities in and around the Doyang reservoir, which was presented to the Chief Minister on the 25thof June, 2018. With the Chief Minister’s interest and on line with his vision to make Nagaland a tourism destination, the event was approved in the cabinet with a new nomenclature Amur Falcon Conservation Week 2018.

Nagaland Tourism along with District Administration Wokha arranged a befitting inaugural ceremony with the Hon’ble Governor of Nagaland Shri PB Acharya as the Chief Guest on the 8th November 18, 2018 and wrapping it up with Special Guest Ms. AjanuoBelho, Joint Secretary Tourism gracing the closing programme.

Even though the event was held for the first time and in its infancy, the response from tourists all over was overwhelming. The events were spread out all over the surrounding areas of the Doyang Reservoir and an estimated footfall of 15,000- 20,000 tourists have attended or witnessed the three day event. The participation of the local communities and the revenue generated due to the three day event has people suggesting that the event should be extended a couple more days in the coming years. Local talents, expertise, products and enthusiasm along with introduction of new events blended well, which showcased in a more organized way can be the next big seller for Tourism in Nagaland.

Let’s get to know in detail about the vivid activities and attractions available for the tourists every year:

In addition to so many adventure and activities to be done, there will be mouthwatering ethnic, continental and other food options too for the tourists to make the festival even more memorable.