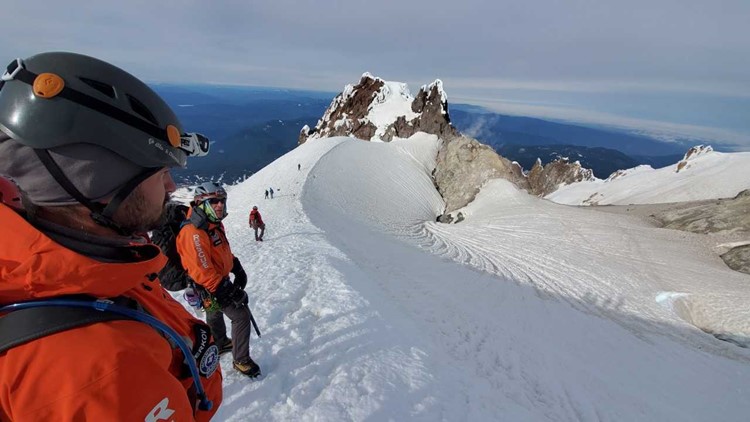 KGW’s Pat Dooris climbed to the summit of Mount Hood, and brought a camera along with him to document the once in a lifetime experience.

Climbing Mount Hood means you will cover a distance of roughly 3.2 miles each way and gain a mile on the way up. It’s a difficult climb and some of it is technical.

One of the hardest parts of climbing Mount Hood this time of year is lack of sleep. I went up late Sunday into early Monday with Erik Broms, Nick Maslen, Tim Ozerkov and Mark Morford from Portland Mountain Rescue. We met in the Timberline parking lot at midnight. Other than a two-hour nap, I’d already been awake for 15 hours and we were just getting going.

“Planning. Maybe we should run through the plan real quick,” said Erik Broms, as we all met in the parking lot. He detailed the goals, the weather, the route and asked how everyone felt about each part. Spring and summer climbs force folks like me (who are a tad slow) to start early. We are on the summit when the sun comes up and then off before the ice and rock melt, and come down.

The beginning of the climb is a two-hour slog from the parking lot to the top of the Palmer chairlift. It’s a two-mile trudge from an elevation of 6,000-feet up to 8,500-feet. Then, it was time for a break. We’d already put crampons on our boots at an earlier stop. The night air hovered in the low 30s, and the snow crunched with ice under our boots. By 5 a.m., four-and-a-half hours into the climb, the first hints of dawn’s blue light appeared. We reached an area called the Hogsback. It is a narrow fin of snow created by the mountain winds. The middle of that fin leads to the steepest part of the climb and a narrow path through a rock formation called the Pearly Gates.

PMR climber Tim Ozerkov helped document our adventure. He captured me on the way up, happy for any break as we climbed up toward the Pearly Gates. The Gates are so narrow, it feels only wide enough for about two people at a time. Above that is another steep slope and then, finally, at 11,240 feet, we reached the summit. It was six hours after our start.

“Pat Dooris coming up to the summit of Mount Hood. First climb!” said Erik Brom, who encouraged me every step of the way. The views from the top on a relatively clear day are as spectacular as I’d imagined. Of course, there are still many things that can kill you, including going too close to the edge because the snow may not be supported under your feet. Mark Morford with PMR warned that people have died getting too close to the cliff’s edge and falling through the snow.

Making it to the top was challenging but fun. Climbing back down, though, was terrifying. Broms coached me up a bit from just below the summit.

“Just be real sure of your footing. Have your ice axe uphill side for self-arrest position,” he instructed. Most people, he said, fall on the way down Mount Hood. It’s easy to see how that could happen. My legs were already tired from the long climb up. I’d been awake for 21 hours. And this was the most dangerous part of the climb.

There are other boot steps to follow in the frozen snow but with such a steep slope down, and nothing to stop your fall, even a single catch of a crampon blade could bring disaster. Fortunately, that did not happen. And I had a long, slow, safe climb down the mountain. It took six hours to reach the summit. And after frequent stops to take pictures and capture video, we made it back to the parking lot in five hours.

It’s a day I will always remember on Oregon’s tallest mountain.